How did Vanuatu become one of the happiest countries?

Largley rural with an agricultural economy, the small South Pacific island nation is a happy nation.

Despite being prone to natural disasters, this Pacific archipelago's unique combination of sustainability and tradition makes it one of the happiest places in the world.

One of the happiest places on Earth sits in the middle of the Pacific Ocean. Vanuatu, a slingshot-shaped country that comprises more than 80 islands nearly 2,000km east of Australia, ranked among the four happiest nations in the world – and the happiest outside of the Americas – according to the Happy Planet Index. The rankings take into account a nation’s wellbeing, life expectancy and inequality levels, along with its ecological footprint.

What makes this tiny nation so happy? Since its independence from joint French and British rule in 1980, all land in Vanuatu belongs to the native ni-Vanuatu population and cannot be sold to foreigners. A 2011 survey by the Vanuatu National Statistics Office (VNSO) indicated people with access to land are, on average, happier than those without it. Today, about three-quarters of the country’s 298,000 residents live in rural areas, and the majority of islanders have access to land where they can live and grow their food.

The same survey found that goods such as pigs, yams and the South Pacific crop kava (a kind of pepper plant sometimes used to relieve stress and anxiety) are easily accessible and exchanged in Vanuatu without money. 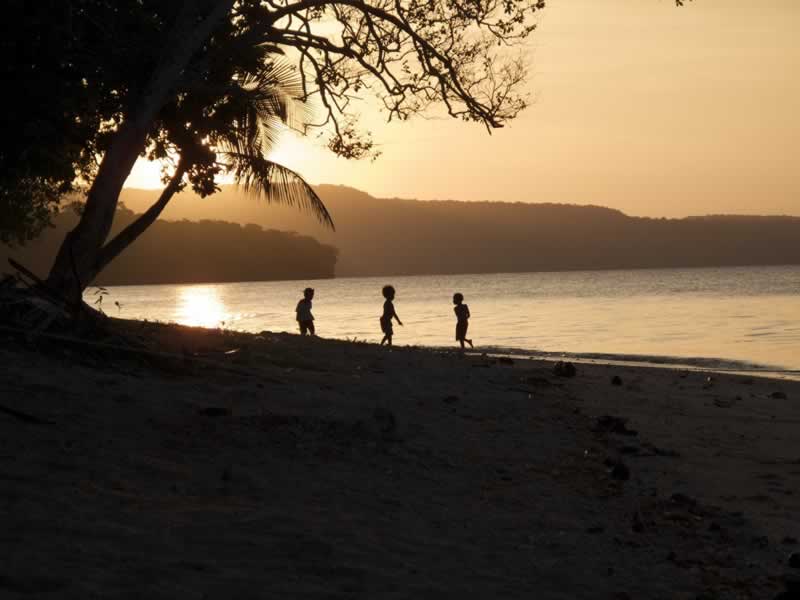 Another source of happiness is the islanders’ strong connection to tradition and the archipelago’s varied landscapes, which range from rocky mountains to coral reefs. “Vanuatu” actually means “Our Land Forever” in many of the 139 indigenous languages spoken by the ni-Vanuatu – making it among the most linguistically dense nations in the world. Indigenous languages are the primary language spoken by 92% of ni-Vanuatu and the vast majority of the population has a strong or moderate understanding of traditional planting cycles, family history and the importance of local flora and fauna.

Yet, the country still faces some challenges. Situated in the Pacific’s Ring of Fire, Vanuatu is highly vulnerable to natural disasters, and in recent years the islands have been threatened by rising sea levels and changes in weather patterns. In fact, the archipelago is considered the world’s most at-risk country for natural hazards, according to a 2014 report by the United Nations University. In 2015, Cyclone Pam swept through the islands, causing extensive damage and leaving 75,000 people homeless. But despite all the wreckage, residents quickly started rebuilding the villages, demonstrating their powerful resilience.

Tweet
Published in News Articles
More in this category: « Volunteer vacations to bridge the generational gap Top-trending Travel Locations 2020 »
back to top