Seventeen-year-old Madison Leatherwood took a two-week working vacation in the rainforest of Costa Rica with Globe Aware. She relates her remarkable adventure with the  Morris Daily Herald of Morris, Illinois: 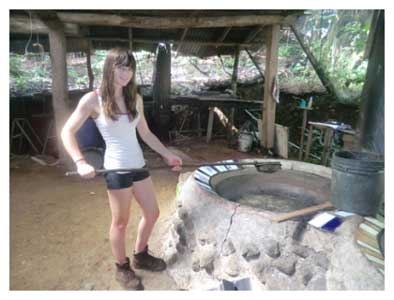 MINOOKA — When some people go on vacation, they think of relaxation — but not 17-year-old Madison Leatherwood of Channahon, a senior at Minooka Community High School.

This summer, Leatherwood took a two-week working vacation in the rainforest of Costa Rica. She could have opted for working with turtles on the beach in Guatemala or a surfing vacation.

Instead she chose a remote village, high up in the mountains, with only 60 residents scattered around a tiny “town” called El Sur.

The residents of El Sur originally lived deeper in the rainforest, but were forced to relocate as part of a movement to preserve the land.

“A lot of people left (the community) because they didn’t want to re-establish their lives,” Leatherwood said. “They are very poor.”

As they try to rebuild in a different area, residents are aided by volunteers through an organization called Globe Aware.

Leatherwood used the opportunity to work with Globe Aware so that she could travel. In this way, she can satisfy her travel bug and help people around the world at the same time.

“I really wanted to experience a different culture and felt like this was the best option for me,” she said.

There is only one phone, a pay phone, in El Sur. Just five years ago, they got flush toilets; seven of them serve the community. They have electricity, even some TVs, but the power goes off and on.

The town has a church, a store that doubles as a tavern with an adjacent make-shift pool hall, a one-room school and a town hall building used for community dinners and meetings. The library inside the town hall is a single shelf lined with books.

Leatherwood stayed the first week in a large (by El Sur standards), one-bedroom cabin built for Globe Aware volunteers, along with a small group from three different states. The bathroom and shower, sans hot water, were underneath the raised living area.

The other volunteers went home during Leatherwood’s second week, so she stayed in the home of Gilda, a resident and representative for Globe Aware. Because she is underage, Gilda and Leatherwood’s guide Mario worried for her safety.

Gilda’s home was much smaller and more run down than the volunteer cabin. An opening between the walls and roof allowed air to circulate, but it also made it easy for critters to get inside. A huge spider didn’t faze Gilda as she swatted it off Leatherwood’s bed, saying it was nothing.

Two of the nights she was visited by a vampire bat while she was in bed. She had to keep shining a flashlight on it to startle it away.

The work Leatherwood did to aid the people of El Sur was varied. She milk cows and learned to make cheese from it. She worked at the town sugar mill, helping to prod along the oxen as they walked in a circle, turning gears that ran rollers to pulverize the sugar cane.

Some days she worked directly with the cane, straining it as it liquefied or stirring it as it turned to a consistency of syrup.

She dug shallow drainage ditches alongside the roads and helped construct small wood boxes that were used as frames and filled with cement. The cement squares were then embedded with water pipes to use in homes, protecting the pipes from swelling and bursting.

“I tried pretty much all the jobs,” Leatherwood said.

Every bit of supplies were used and re-used, she said.

“We took all the nails out of the wood, scraped the cement off and reused it,” Leatherwood said. “We also reused all the nails. That’s how limited they are.”

Leatherwood learned an entirely different way of life in El Sur. She awoke at 5 a.m. to get her work done before the rains set in around noon. During the down time, residents did a lot of relaxing, she said.

By late afternoon, the sun came back out and it was time for dinner and a little fun, like a community soccer game most nights.

Leatherwood often went horseback riding when she had free time. One day her group followed a stream through the rainforest to a waterfall. They jumped into the lake below and swam.

The locals chose a specific horse for Leatherwood to ride — white with black spots.

“They said it was like me because it had freckles,” she said.

The best part of her adventure was the many people she met and came to care about. Like her guide Mario, who did much of the construction around town; and Robert, the town carpenter who built amazing pieces of furniture with not much more than an electric saw and a few hand tools.

Gilda taught her to make cheese, peel cocoa beans for hot chocolate and strain fruit from the rainforest into delicious juices.

“Everyone was so nice. I met friends I would like to go back and see again,” she said. “(But) there’s also places like Australia. Someday I want to go to Ireland or New Zealand. I want to see how different it is from here, in as many places I can afford to go.”

Tweet
Published in News Articles
More in this category: « Volunteer Vacationers to return to Peru Make a volunteer vacation part of your summer vacation plans »
back to top