We know so many of our Globe Aware volunteers are true foodies! You'll love this list, and you can try many of these on our volunteer vacations!

Top 7 Foodie Destinations To Visit In 2023

Keeping up with the yearly tradition, TasteAtlas has unveiled its World’s Best Cuisine ranking. 95 major tourist destinations were assessed for food excellency, taking into account ingredients, regional varieties and quality of national beverages, but there are 7 mouth-watering picks in particular you might want to bookmark for 2023. That is, if you’re a true foodie: 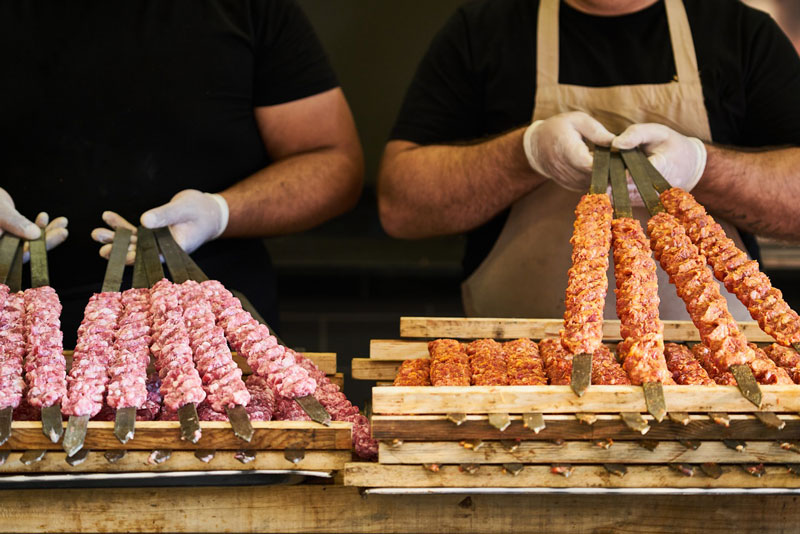 Turkiye (formerly Turkey) is a country straddling the Eurasian border with a History spanning millennia. Sharing close ties to Greece and having existed under several different empires, from the earliest Hellenic kingdoms, to the Ancient Romans, to the Ottomans, the country has incorporated a cross-national Mediterranean culture and diet.

According to TasteAtlas, the best rated Turkish foods are Kaymak, a creamy dairy product resembling clotted cream, except it’s thicker, traditionally made from water buffalo, sheep or goat milk, Sujuk, a spicy, fermented sausage popular not only in Turkiye, but in the Balkan Peninsula as a whole, and Cağ kebabı, a horizontally-roasted lamb kebab.

America’s undisputed favorite, Mexico is highly sought-after not only as an upscale winter sun getaway – though the popularity of Cancun certainly cannot be understated – but as a cultural destination with a distinct menu drawing on ancient Mesoamerican cuisine, rich in maize, beans and hot peppers, and later on, other Spanish and pan-European influences.

Traveling Mexico as a foodie, you must not forget to try the world-famous Oaxaca cheese, a white semi-hard originating from the namesake state, Cajetas de Celaya, a type of dulce de leche made from sweetened, caramelized goat milk, and of course, all the well-known Mexican classics: corn tortillas (chilaquiles), ranch eggs (huevos rancheros) and tacos.

With 4.54 star-rating on TasteAtlas, Indian is one of the highest-peaking Asian cuisines on the ranking. Some of the most popular and defining ingredients found around the territory are cumin, Garam masala, a blend of ground spices added to dishes for flavor and color, Ghee butter and tamarind.

It is worth noting there are at least 28 administrative regions in India, and within those, countless more provincial divisions with diverse ethnic compositions, where specific customs and cooking practices are observed. Indian foods are rarely a homogeneous bunch, and that’s what makes the country such an alluring place to explore as a food connoisseur.

Traditionally based on rice and seafood, served either raw as sushi or sashimi, or grilled, Japanese food has expanded far beyond Japan’s own national borders through its expat community (and their descendants), becoming as internationalized as pizza or burritos. Japanese is, in fact, one of the top 15 most ordered takeout foods in America.

This may lead some to believe they don’t need to fly to the other side of the world to experience Japanese dietary culture, but this couldn’t be further from the truth. TasteAtlas lists over 1200 local restaurants with exceptional culinary choices that are worth the long journey from the U.S., from Kyoto’s popular Sushi Rakumi to Sapporo’s award-winning Miyakawa.

Spain is a tried and true European foodie destination, and the third best rated country on TasteAtlas. Spanning most of the Iberian Peninsula, which it shares with neighboring Portugal and parts of France, it is the ancestral home of paella, churros, patatas bravas and a wide assortment of Mediterranean seafood recipes.

If you’re looking for some truly remarkable gastronomic experiences, then you shouldn’t miss Casa Bigote, in the historical pueblo of Sanlucar de Barrameda, Del Oso, a Michelin-reviewed eatery close to Cantabria in Northern Spain, Barcelona’s trendy Bar La Plata, and Anaco in Santiago de Compostela, capital of the autonomous province of Galicia.

Greek food traces its origins back to Ancient Greece and Byzantium, though it’s also incorporated other elements from foreign cultures, notably Turkish, Italian and South Slavic. Whether you’re in Athens, nestled cozily in the Balkan mainland, or one of the many paradisaical Aegean islands, locally-sourced products remain staple ingredients in many dishes:

Wheat, olive oil, vegetables, grains, fish and meat, the most widely-used being pork, poultry, beef and lamb. As the runner-up on the latest TasteAtlas ranking, and having reopened for tourism with no health-related entry requirements whatsoever, Greece is sure to benefit from the latest surge in travel demand – and a revived interest in the Hellenic World.

Boasting a 4.72-star rating, more than any other destination surveyed, Italy is the number one vacation spot for foodies in 2023. From arancini to zabaglione, all of your culinary favorites from A to Z can be found here, as well as a whole range of world-class restaurants, with Trattoria Trippa in Milan, and Amerigo dal 1934 in Savigno to name a couple.

Italy is also eager to introduce Americans to lesser-known destinations, offering to cover their transportation costs traveling from within Italy to Friuli Venezia Giulia, where chefs have specialized in duck ragù with pappardelle. Other incredible off-path regions serving scrumptious food include the mountainous Abruzzo and the Adriatic Apulia.

Tweet
Published in News Articles
More in this category: « Where to Travel in 2023- astrological advice Countries around the world celebrate New Year after Covid lull »
back to top