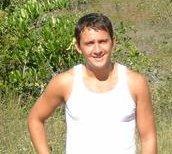 I was born and raised in Belo Horizonte, State of Minas Gerais, in Brazil. I also went to college there, studying LAW. I got my J.D. in 1996 and practiced Law for two years. In 1998 I moved to New York City to start a graduate course. Initially I thought of a Master in Law, but because I could not afford such a course, I ended-up going for an MBA in financial accounting. I lived in New York from 1996 to 2002 and this experience made me fluent in English, though it didn’t do so much for my soul. In 2002, almost a year from the 09/11 attacks, I decided to move back to my home country and to start a new life near my siblings. After my return to Brazil, I was hired by a Jamaican Hotel Chain, called SuperClubs, where I was an assistant controller. The Globe Aware experience for me started totally by accident. I was returning from a trip to Cuba and at the airport, while trying to check-in, I met a wonderful person from Globe Aware. She told me that GA was trying to run a program in Brazil and I said I would love to help them establishing such a program. So she did and I became the Brazil program coordinator. I look forward to seeing you all in beautiful and festive Brazil.