There's a Tickle Bar Opening in Dallas. Yeah, You Heard Us

Remember the back tickles you loved as a kid, the black magic your mom used to put you straight to sleep? How about the times you almost dozed off while someone played with your hair? Are you relaxed just thinking about it?

Kimberly Haley-Coleman wants to sell you that experience with the launch of her new business, The Tickle Bar, and she doesn’t know if her idea is crazy, brilliant or maybe a little of both.

“When I tell people I get a really polarized reaction,” Haley-Coleman says. “It’s either, ‘Oh my God, that’s genius, why hasn’t anyone done that before?’ or it’s ‘No one is going to do that. That’s the craziest thing I’ve ever heard.’ That’s when I knew I had to try it.”

Haley-Coleman is somewhat familiar with controversy, as this isn’t her first polarizing business. She started a “voluntourism” nonprofit called Globe Aware in Dallas in 2001, which offers global volunteer vacations that combine personal travel with work assisting foreign communities. 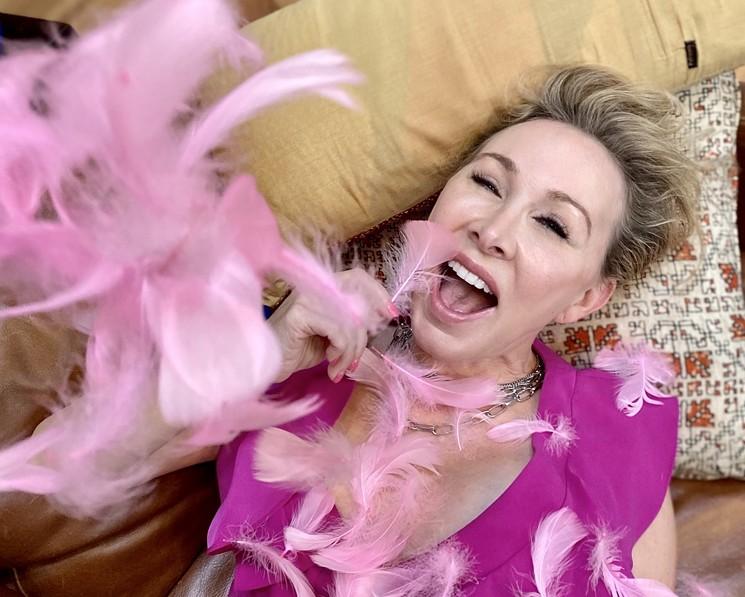 Despite some people’s perceptions that voluntourism is just a way for rich Americans to stroke their god complexes, the nonprofit thrived in Dallas for nearly 20 years until COVID-19 and the border closures that came along with it brought its operations to a halt.

“That’s a big reason why I’m doing what I’m doing,” Haley-Coleman explains. “We really rely on borders being open and planes flying and people feeling up for travel, so it’s been a rough year.”

The businesswoman needed a fresh idea to pay the rent on her then-empty office building off Hillside and Mockingbird.

“I thought, ‘I wish I could get somebody to tickle my back. Why don’t people do that?’ So I decided I’m going to freakin’ do it,” she says. “Who knows if it’s going to work, but I’m going to do it.”

If you hear the name "The Tickle Bar" and it reminds you of Dry Bar, that parallel is intentional, even though The Tickle Bar doesn’t offer any of the same services (so don’t go there expecting a hair wash and a blowout). The Tickle Bar is more of a massage/spa experience, but Haley-Coleman wants people to envision the same affordable luxury they get when they go to Dry Bar. Think pampering and relaxation.

“I thought, ‘I wish I could get somebody to tickle my back. Why don’t people do that?’ So I decided I’m going to freakin’ do it.” – The Tickle Bar owner Kimberly Haley-Coleman

The Tickle Bar is located in Globe Aware’s previous office at 6500 Mockingbird Lane, which has now been reoutfitted to accommodate the new gig. Starting Dec. 7, Dallasites eager to have someone tickle their fancy will be able to book appointments online.

At the appointment time, guests will be greeted at the door by a masked technician, and as long as they are also wearing masks — yes, this is a "no mask no service" business — the guest will be taken to a waiting area and served pink cookies and a glass of rosé.

From there, guests will be taken into one of the five “tickle tents," Moroccan-style tents adorned with fairy lights, where they’ll be given the options to take their shirts off, as well as to close the tent flap for privacy.

The list of shiver-inducing services is short and sweet: hair play, back tickles, or both, for 25 or 50 minutes.

Back tickles can involve feathers and textures, “shape tracing," and a soft touch or firmer scratches for more ticklish individuals. Likewise, the hair play sessions can also involve a variety or combs or devices.

For those who want to try before they buy, Haley-Coleman is hosting an outdoor, masked, socially distant Tickled Pink event on Dec. 5 at 3:30 p.m. Drop by for a free T-shirt and pink feather boa and some Instaworthy pictures of shirtless guys in feather wings. If you’d like a “tickle teaser” you must notify them in advance. Otherwise, you can watch and see what all the oooh-ahh is about.

Haley-Coleman admits she’s “leaning a bit on the prurient interest of people when they hear about tickles.” And she’s embracing it.

“Even though it isn’t, if it gives me a double-take, I’m going to take that,” she says. “Because when they look twice they’re going to see that it’s people like me, an over-50 woman, who is the client, not the 20-year-old fraternity guy looking for a happy ending.”

At the end of the day, Haley-Coleman just wants to put some smiles back on people’s faces after a long year of social isolation.

“We’re all just so sick of [COVID] and we’re really missing touch,” she says. “I just hope we’re doing this in a fun and innovative enough way that people go, ‘Yeah that’s something that I want to do.’ Jobs and joy, that’s what I’m really wanting to create.”

The Tickle Bar was originally created as a way to keep the lights on for another business (necessity is the mother of invention, after all), and it's Haley-Coleman’s hope that the concept will stick. However, the first five months will be a trial period.

“If I build it, will they come?” Haley-Coleman says. “If it doesn’t go well in five months then I’ll shut it down and go back to only doing Globe Aware. And if it goes really well, then I’d like to go buy a retail space and outfit it the way I really want to do it in my dream world. I’d really like to do both businesses simultaneously for the rest of my life.”