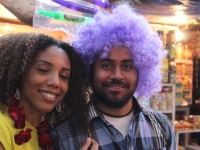 Determing the next great trip and adventure can be a challenge: finite money and time must vet seemingly infinite travel opportunities. Generation Z travelers are turning to social media to help them in their due diligence, finding the next-best-destination, trend and activity. Allie Jones in a recent article for Conde Nast Traveler examined the trends and motivators sending the newest generation of travelers around the world.

Experts differ on the exact confines of America’s newest generation, Gen Z, but for the purposes of this article, let’s say that it includes anyone born after the year 1995. That means that Gen Z’s oldest members are now in their late teens and early twenties—the time of life when, if you’re lucky, you get to start traveling on your own.

Like many of her peers, 18-year-old influencer Kayla Kosuga has documented her early travels on social media. Kosuga, a recent high-school graduate, has 550,000 subscribers on YouTube, where she’s posted videos about her “morning routine,” her boyfriend, “being grounded,” and other relatable aspects of teen life for the last two years. Last year, she recorded a vlog during a family trip to Washington, D.C.—the classic boring educational vacation. But this year, she informed her followers she was striking out on her own in a video titled “TRAVELING WITHOUT MY PARENTS FOR THE FIRST TIME.” (She went to Beautycon, an influencer conference, in New York City.) Later, she traveled to Bali with her boyfriend and documented the trip on YouTube and Instagram, where she has 162,000 followers.

According to Jonah Stillman, a 20-year-old expert on his generation, this documentation is a crucial part of how Gen Z travels, whether they have hundreds of thousands of followers or not. “We really are the first native generation to a world with iPhones, smart tablets, smart watches, all these different things,” he says. Stillman runs the consultancy GenZGuru with his father, David Stillman, a Gen Xer, and they advise companies like the NFL and Deloitte on how to reach young consumers. “Social media plays into, not only travel, but almost every aspect of life” for Gen Z, Stillman says. “Gen Z pretty much goes through every decision they make, every activity they do, every trip they take, with the lens of: how can I create a permanent moment using social media? Whether that be taking an Instagram photo, or creating a travel blog, or posting day to day updates on my Snapchat story.”

Riley Taylor, a 20-year-old photographer who often shoots Gen Z travel influencers at music festivals like Coachella and popular European destinations like Venice, confirmed that social media is one of the first things he thinks about when booking a trip. He typically works with models like Eva Gutowski, 24, an influencer who parlayed teen YouTube stardom into a travel-influencing career, creating glowy, dreamlike images that, he says, are extremely popular with his peers. “One of the things I love about social media is that you can kind of see the places that other people have been to and curate the way that you would want to visit these places and what you want to do,” he says. “I often use the saved section of Instagram and will save a bunch of inspiration photos for a certain place that I want to go to. That kind of helps me figure out where I want to go and what I want to do there and make sure that I take photos of.”

"GEN Z PRETTY MUCH GOES THROUGH EVERY DECISION THEY MAKE WITH THE LENS OF: HOW CAN I CREATE A PERMANENT MOMENT USING SOCIAL MEDIA?"

Taylor said that Instagram is currently the most influential platform among his peers, followed closely by YouTube. There are thousands of travel influencers on these platforms who make a living visiting far-flung destinations, often at the behest of hotel, airline, and fashion brands, he adds. And many of them are just barely out of school, like Taylor’s friend Gutowski, who has 6.8 million followers on Instagram and recently posted photos from Tokyo, New York City, Death Valley, and Disneyland. (Disneyland remains a very popular Gen Z destination, perhaps because the park encourages visitors to take as many photos as possible.)

According to Stillman, influencers like Gutowski have essentially replaced old-school travel agents and formalized review sites for Gen Z travelers. “What we have seen specifically with travel, picking travel destinations is pretty much the end of the era of experts as we know it,” he says. “We're not going to big travel agencies or companies to get recommendations of where we are going. It's really peer-to-peer reviews, and you see that in almost all aspects.”

Taylor concurs. Usually he picks places to travel “by word of mouth, or if I see somebody I trust and look up to on social media [who has] been there, then that would definitely be a deciding factor,” he says. He adds that social media influencers have been his primary motivation when it comes to planning trips for himself—and its clear that Instagram and YouTube have made travel feel more accessible than ever before to Taylor and his peers. “From a young age, I really did want to travel and I was always so scared and didn't think that it would actually happen," he says. "But from watching so many people on Instagram and YouTube and different social media platforms go to these places and see that it's not a big deal, I was kind of able to get over my traveling fears and start traveling.”

And like many of his peers, Taylor has been savvy about getting certain trips paid for. Brands like the fashion company Revolve have invited him to Coachella to take photos of other influencers, who in turn promote the festival to the general public. (Taylor himself has 128,000 followers on Instagram.) Stillman says that music festivals are a common first trip for his peers to take away from their parents. “I think that Gen Z has really brought back what maybe the traditionalists remember in their age of Woodstock—we have our modern-day versions,” he says. “You see on social media that Gen Zers flock to these different events, whether it be Lollapalooza, Coachella, Country Fest, all these different things, because it's the best of both worlds. You're vacationing, you're with friends, you're in a very unique environment.”

Overall, Stillman says that Gen Z travelers are price-conscious and more likely to spend money on travel and experiences than pretty much anything else. “Growing up in the midst of the 2009 recession and seeing the downfall of their parents' money” contributes to this mindset, he says. “We are very price-conscious shoppers. Oftentimes, when you buy a premium item, or something nice, it creates buyers' remorse. However, when you see my trip, or you buy a festival ticket or concert ticket, whatever it may be, you very rarely have remorse about a great experience with friends. You also get to create that memory on social media.”

And that “memory” gets shared with many others, providing them a glimpse into influencers' lives and allowing them to build up the confidence for their own first trips. When Kosuga posted “Traveling Without My Parents For the First Time” on YouTube, she was sharing the ups and downs of navigating everything from Beautycon to Times Square (fan encounters included). The travelogue garnered over 300,000 views—and is one of her best-performing videos to date.