A family’s tradition of sending grandchildren, once they reach the age of 16, on trips to introduce them to different cultures and people and around the world continues. Here is a travelogue entry by Zeth to Guatemala with Globe Aware. Previous grandkids selected volunteer work in the Andes mountains of Peru, with the Roma people of Romania and in a small rural village in the West African country of Ghana. 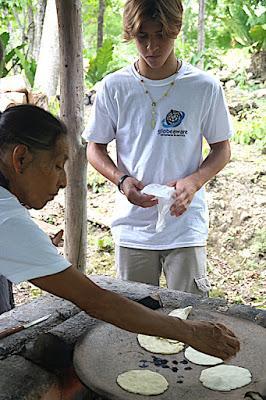 Moments like yesterday are why I’m a travel junkie. The guys still asleep, I took an early walk along a small road where we’re staying. What a treat! No city noise, only the idyllic sounds of nature: tropical birds unlike we hear at home … the occasional cry of a monkey, perhaps chiding her youngster … insects buzzing … and the crunch of my footsteps along the gravel-dirt road.

After a while a small older man walked in my direction, and I offered my best “Buenos dias, senor.” He offered me a mostly toothless smile and gently reached out toward me – but not his right hand, as if to shake hands, his left hand. He held onto my hand and we had this wonderful nodding and eye-to-eye exchange while he said something I couldn’t understand. Had he been an American in the U.S., I would have likely averted my eyes and pulled back thinking, “Why is he still holding onto my hand?” But he just continued to smile with old soul eyes and, as we parted, he blew me a kiss! For me travel is less about the big Eiffel Tower/Pyramids/Vatican imagery, and more these small, magical moments when we have real human contact with people we would otherwise never encounter. Blissful!

Day One was mostly orientation and a few hours of R&R. Globe Aware's local organization is Project Ix-Canaan, founded by Canadian Anne Lossing who came to Guatemala 20+ years ago toward the end of Guatemala’s long civil war. She wanted to empower the local Mayan community to protect their own rain forests, and identified the community first needed health, education and opportunity.

Over the years she and her Guatemalan husband, a doctor, have established a medical clinic and a dental clinic (at left) which is staffed largely by visiting clinicians from the U.S. and other places. (No patients on the weekend, so it was empty.)

They also have established an after-school youth development center and a women’s center, each of which we toured today.

We also visited a school where we’ll be teaching later in the week, and Anne pointed out shards of pottery on the ground – at least hundreds but easily 1,000 or more years old – that can be found in several places in this region called Peten. The Mayans believed that vessels had a kind of spirit and they would break most of their pots during sacrifices or in burials, and also every 40 years to start a new beginning.