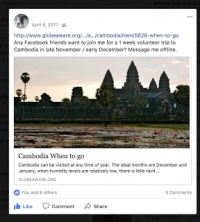 It all started with a Facebook post. 'Anybody want to join me for a 1-week volunteer trip to Cambodia...?' Well, sure I do! And thus began a life-changing adventure!

On the Wednesday night before Thanksgiving, despite the holiday madness, my friend Mira Wooten was gracious enough to drive me up to SFO. There I met my friend and co-pilot on this adventure, Kyle. Kyle and I have been friends for almost 30 years. He and his husband travel extensively and often ask for friends to join them. I always wanted to say yes and the time was finally right!

At 5 minutes after midnight, while turkeys were defrosting all across the US, our Singapore Airlines flight took off for Cambodia, by way of Hong Kong, and Singapore. We arrived in Siem Reap, Cambodia around 10 o'clock in the morning on Friday and were met by our Global Aware coordinator, Alin. Globe Aware, a nonprofit 501 (c) (3) develops short-term volunteer programs in international environments that encourage people to immerse themselves in a unique way of giving back. Alin introduced us to our tuk-tuk driver, Mr. Raht. We were delivered safely to our guest house where we checked-in and freshened up from the 24 hours of travel. We spent Friday through Sunday sightseeing with an extremely knowledgeable and somewhat crazy tour guide. He had us trekking the road less traveled as we explored the famed temples of the region. Angkor Wat was of course, breathtaking. Baphuon and Ta Prohm were incredible. But for me, the intricacy and history of Angkor Thom were most compelling. There are 54 four-faced spires, representing Compassion, Sympathy, Charity, and Equanimity which watched serely over the out across the provinces of King Jayavarman VII's empire. We could all benefit from those faces reminding us!

On Sunday we also stopped by to check out the school where we'd be volunteering that week. Even though it was a Sunday there were about 30 children, aged 2-18 waiting to meet their new teachers. It was exciting and humbling to see the school. The classroom is about 8 rows of benches and tables, under an overhang off of the mother's house. There is a dirt floor and wooden benches with old school posters hanging on the wall of the house and a whiteboard on one end.

In Siem Reap, students attend government school only half a day. During the Khmer Rouge, dictator Pol Pot, in an attempt to socially engineer a classless communist society, destroyed all of the schools and killed or imprisoned most teachers. The impact of this remains 40 years later. Due to a lack of resources and minimum government funding for schools, there is a shortage of teaching material and school facilities. Teachers, like those in this county but with a bigger detriment, are underpaid. Children that live where there are private schools and have the financial resources to attend, go to private school or tutoring for the other 'half' of their day. These schools are usually taught in English, so students are learning English along with additional content. In the poorer villages outside the city, no such options exist.

A few years ago, a mother in the village decided to start an English school for the village children. GlobalAware became aware of the school and decided to bring in volunteers. Which is how Kyle and I ended up in the small village outside Siem Reap.

Sunday night, Kyle, the planner, sat us down to plan out what we would teach. We'd been given the primer they were using at the school, but the teacher in me just couldn't use it. We talked about what vocabulary would be most useful to these children and tried to focus on that. So time of day, days of the week, greetings and such were our starting vocabulary. WIn addition, we ended up covering colors, shapes, body parts (head, shoulders, knees and toes) and we also did some lessons in hygiene.

Monday morning arrived and Kyle and I were excited to work with the children. We had hoped to be able to break them up into smaller groups, but since we only had one interpreter, we decided that would be too hard. We started in with greetings and "hello my name is...." It was so challenging working with an interpreter, but it made us really thoughtful and reflective on word choice. We made it through the morning session and Mr. Raht, took us back to our lodging, where we freshened up a bit. I asked our manager there where to get school supplies. Since her children were home for their midday break, she volunteered her kids walk us to the school supply store to pick up art supplies. Everywhere we went during the week, people were just so nice! After the store (where I resisted the urge to buy everything I could carry) we had a tasty lunch before heading back to school for the afternoon group. Several students were there for both morning and afternoon. We covered much of the same material and tweaked our lessons a bit for the slightly older group of students. Many of the morning children were there for all or part of the afternoon sessions. One of the little guys in the front row fell asleep in the afternoon. His friends tried to wake him, to no avail. I told them to let him sleep...learning is hard work! They were all so eager to learn. It was hot, dirty and hard work, but the hugs and smiles made it all worthwhile.

While I was away, I posted some about our experience on Facebook. One comment by my friend and former colleague struck home:
MK As I stand in front of my highly privileged students who are generally so unappreciative of what they have and what others do for them, I think of the students you are teaching who are at the other end of the “privilege” spectrum, and get such joy from simple things and those who try to help them. I think I would take your students over mine any day.

Sandra: It is incredibly humbling, MK. One of my Bagby friends posted a pic of their lost and found rack. These children would be so grateful for a second or third shirt, much less so many clothes that you can ‘lose’ some. Perspective.

Monday after school we stopped by the lumber yard to order supplies to repair Grandmother's home, which had been damaged in the rainy season's storms. Tuesday we worked with shapes and colors and names of everyday objects. We had to remember that in Cambodia, everyday objects were not the same as in the States. Every evening, after a shower and a nap, Kyle and I would meet to plan out the next day, before venturing into the city for dinner. The days flew by so quickly. The students were so proud of their work and even Mr. Raht, knowing the value of speaking English in a country whose economy was fueled by tourism, participated in all the lessons.

In addition to teaching, we built and installed two walls for Grandmother's home and also built a wheelchair. Another Khmer Rouge remnant in Cambodia is landmines. Cambodia is one of the most heavily mined areas in the world; some estimates run as high as ten million mines (in a country of 11.5 million people), though the Cambodian Mine Action Center (CMAC) estimates 4 to 6 million mines. These mines came from many places, likely including the USA. Partnering with Free WheelChair Mission, Global Aware provides the parts to assemble an easy to build, rugged wheelchair made from bicycle tires, plastic lawn chairs, and a welded frame. For $80, a wheelchair can be built, shipped, and delivered throughout the world, giving landmine survivors mobility, independence, and dignity. We were able to get parts for one while we were there and assembled it on Thursday, but were unable to connect with its recipient while we were there.

Friday came too soon and we said goodbye to our students. I am already trying to figure out how I can come back and teach for a longer period of time. Being with these kids, feeling their desire to learn and understanding the value of an education in a third world country really reignited my passion for teaching.

Read 3447 times Last modified on Monday, 26 February 2018 15:37
Tweet
Published in Globe Aware news
More in this category: « Voluntourism - Your Ticket to Cuba Globe Aware Trip to Cambodia: The Impact of Volunteering for a Family »
back to top